An Open Toolchain for the TI Stellaris 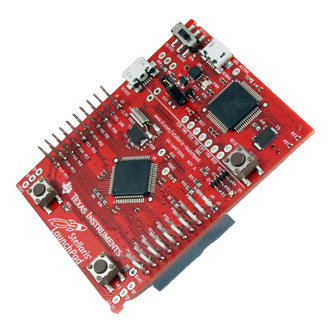 In my last post I set up an ARM EABI toolchain to work with my CCC r0ket badge. Incidentally, I just received my Texas Instruments Stellaris dev board and wanted to start playing around with it. Unfortunately, TI's development tools are highly bloated, proprietary and almost exclusively geared towards Windows environments. Unacceptable. I wasn't about to download a 1.3GB file just to get a LED blinking on a dev board using my Mac.

As it turns out, all the building blocks are there, and it's just a matter of putting them together. Here's how to get a simple project compiled and flashed on your TI Stellaris by using an open toolchain.

First, we need a cross-compiler. For that, we use the ARM EABI toolchain which can be installed using the amazing ARM EABI Toolchain Builder. Follow the instructions, and make sure you have the respective bin directory in your path.

Next, we need the flashing tools. Fortunately, some code is already available from the lm4tools package. It's dependent on libusb, so install that with your favorite package manager, and otherwise it's a breeze to install. lm4tools supplies us with both a flashing utility as well as with a USB/ICDI debugging bridge. For now we just want the flashing utility. The package already comes with a readymade binary, which we can try to test, but we'll go ahead and compile our own. It's just more fun that way :)

Finally, we need all the source and header files relevant to the Stellaris. Those all exist in TI's StellarisWare packages, but are a bitch to download. Seriously, I won't even try to link to them. I extracted all the necessary files to my own Stellaris repo on Github, and cloning that should get you everything you need. After cloning the repo, cd into one of the projects, such as boards/ek-lm4f120xl/project0.

If all is well, running make will quickly yield the output binary located in gcc/project0.bin. We're now ready to flash. Point to your lm4flash util and run:

If the flashing process was successful, the RGB LED on the Stellaris should now be blinking blue and red alternatively. Awesome. A trivial exercise would be to add a green blink to the sequence.

It's cool to have the board running at last, but it's a shame TI doesn't make this stuff more accessible and open. From what I've seen so far, the Stellaris is a pretty neat board, and I hope to write more in the future about the advanced functionality you can get out of it.