The past several weeks have kept me very busy on my latest collaboration with new-media artists Omer and Tal Golan. 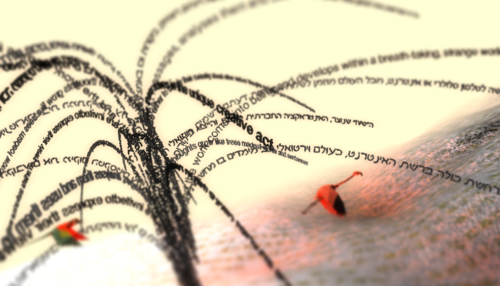 Our project, PlantAComment.com (שיח גלריה, in Hebrew) is an interactive installation that encourages visitors to plant thoughts that manifest themselves as trees in a semi-apocalyptic 3D world. The installation premiered this week at the 2012 Fresh Paint art fair in Tel Aviv. Throughout the week, our project has received much acclaim from visitors of all ages.

On the technical side, the project is a behemoth in terms of how many technologies we've used to make it all happen. The server-side is based on a core Tornado web server that handles all HTTP requests, as well as WebSocket connections. Redis is used both as a back-end store, as well as for pub/sub for new messages that are received via SMS text messages, as well as Twitter and G+ posts. With the help of the amazing Nir Ofek, we've also implemented advanced semantic analysis on all incoming texts, allowing us to cluster similar subjects on the same trees. Credits to the beautiful soundscape go to the most-talented Nir Danan.

The most impressive aspect of the project, by far, is the WebGL implementation of the 3D world that is able of running in-browser on any WebGL-capable modern browser. The highlight for the installation was deploying our project on Google's Liquid Galaxy setup - a 7-machine setup connected to 7 55" LED screens that run in complete synchronization, showing a 180 degree view of the world. This is the first time in the world an art project is deployed on this setup.

Expect to hear more about this project in the near future ;)